I was there at Seattle Central Community College at 3:30 when the march set out. A speaker at the campus specifically said they were headed towards Westlake Plaza to join a bigger crowd and march to protest Jamie Dimon's presence in Seattle from there. Westlake Plaza was plastered with posters about the march, which was to start from there at 6:00. By 5:00, the march still hadn't reached the people waiting in Westlake, even though it's an easy 20 minute walk. Why?

The marchers took off from the college campus south on Broadway towards Pike, where I believe everyone, me, the police, even the marchers themselves, expected to turn right towards Westlake Park. It was a march I'd taken many times before with the Hempfest, escorted by the police.

But then instead of turning right, the leader turned left, crossed the street, and turned left again, making a complete U-turn, now heading north on Broadway. I was wondering where the hell they were going, so were the police, and so were the marchers themselves.

It's like the march organizers didn't know that all you have to do is tell the police what route you're taking and they won't give a damn what your march is about, as a matter of public safety, they will escort you, block off intersections making it safe for you to pass, make sure no one gets hit by a car, and get ambulances there as fast as possible in case one of the marchers has a seizure (I saw this happen).

Either that or they were deliberately provoking the police because they thought the issue was us vs. the police instead of us vs. Chase Manhattan and the international cabal of bankers who rule the world.

The only reason the police weren't working with this march to make it a peaceful act of civil disobedience where no one got hurt is because the organizers saw a protester get shot out of a tree and said to themselves Good Idea, let's get shot out of trees ourselves. I blame them for the violence, which was unquestionably deliberately provoked.

You know what else would have worked? The entire crowd marching into the bank or hotel lobby and simply sitting down and saying nothing. Give the police a hundred people to peaceably cart away.

Follow Vivian McPeak's advice concerning dealing with the police when committing an act of civil disobedience. Don't act so surprised when they bust you. You know it's going to happen.
That's why you're there, so to suddenly go OMG, look what this police officer is doing to me is disingenuous to say the least. That's the plan.

Try this next time. Everyone go up to a cop and introduce yourself. "Hi, I'm Heidi, and you're about to arrest me. I just want you to know that I will not resist arrest, though I may go limp and you may have to carry me out. I understand you're just doing your job. It's nothing personal. Please don't mace me. I don't have any weapons."

They will appreciate it. They will still arrest you, but if you treat them with respect, they might end up respecting you too. You're both just doing your job. No reason to get nasty.

There are those accusing the "leaders" of this march of working undercover for the enemy to try to splinter the movement. I'm not saying it's true, but if it WERE true, they couldn't be doing a better job.

It's time to start a new work group called "Enemy Reduction," the idea being that the less enemies you have, the more chance you have of accomplishing absolutely anything. Every enemy we've got, let's make them our friend.

Posted by michaeldare at 2:37 PM No comments: 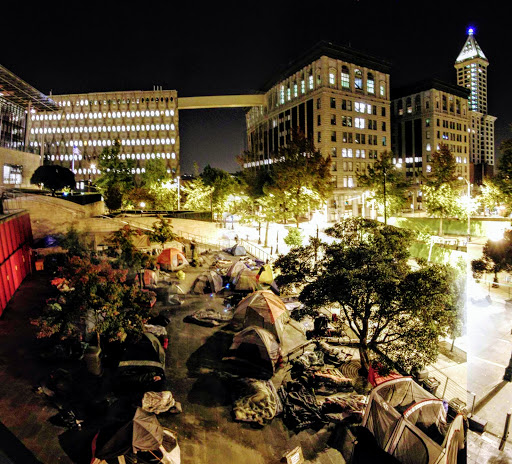 Posted by michaeldare at 12:21 PM No comments:

Give Arizona Back to Mexico

Promote Your Page Too