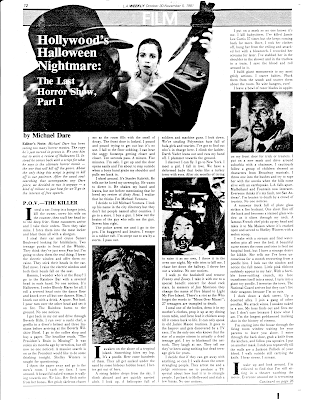 I started out at the LA Weekly as the guy who had to go to all the movies Michael Ventura didn't want to see. Of course this included every horror/splatter B movie made in the 80s. It was enough to drive you crazy, or at least to write something like this.

I was asked to come up with a Halloween piece for the upcoming Halloween issue. Some of my fondest memories are the reactions of editors to pieces I handed in that only bore the slightest resemblance to what was asked for. I'm quite sure Ginger Varney, the film editor at the time, was expecting some sort of celebration of horror films in theaters over the weekend, and not this, a monologue of a killer on the rampage through a mash-up every POV shot in every fucking horror film those bastards sent me to. Let THEM see what it was like to see these films day after day, week after week.

She said it not only wasn't what she asked for, she didn't have a clue what to do with it, so she wrote this intro and it became that week's film feature. 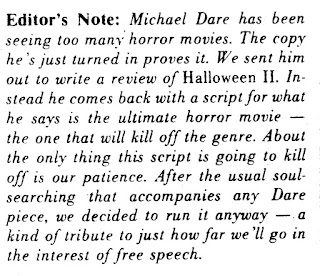 Very popular. Actually read out loud at public events. The only piece of mine republished a decade later in The Best of the LA Weekly.

Anyone got a camera. Hey, it's only one shot. 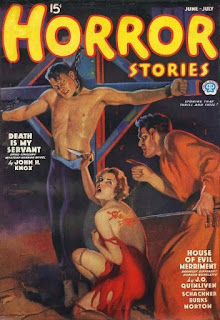 I steal a car. I stop in a burger joint, kill the owner, screw his wife on the counter, then stuff her head into the deep fryer. Some customers arrive and I take their orders. Then they take mine. I force them into the meat locker and blast them all with a shotgun.

I steal their car and cruise Sunset Boulevard looking for hitchhikers. Two teenage punks in front of the Whiskey. They think they've just seen Fear but I'm going to show them the real thing. I lower the window and offer them cocaine. They stick their head in the car. Bad move. I raise the electric window and both their heads fall on the seat.

Hmmm, I wonder who's at the Roxy? I go to the Rainbow Bar with a severed head in each hand. No one notices. It's Halloween. I order Bloody Marys for all. I roll a severed head onto the dance floor and knock over all but one dancer. Him, I knock out with a drink. A spare. Not bad. I pour rum over the other head and set it on fire. The Rainbow burns to the ground. No one notices.

I get back in my car and drive through Beverly Hills. I run over a sushi chef, a gorilla in a diver's helmet, and three Iranians before arriving at the Beverly Wilshire Hotel. I go to the coffee shop and buy a paper. The headline reads, "The President's Brain is Missing!" It was stolen six month ago by terrorists, but till now no one noticed. A massive search is on, as the President would like to do some thinking tonight. Shelly Winters is sought for questioning.

I throw the paper away and go to the men's room. I wash my face. I turn around. A beautiful naked woman is walking towards me. We kiss. Her flesh melts from her bones. Her grisly skeleton chases me as the room fills with the smell of decay. The front door is locked. I pound and pound trying to get out but it's no use. I fall to the floor sobbing. I can hear the soggy footsteps getting closer and closer. Seconds pass. A minute. Five minutes. I'm safe. I get up, the door opens easily, and I'm about to step outside when a bony hand grabs my shoulder and pulls me back in.

I wheel around. It's Stanley Kubrick. He tells me he loved my screenplay. He wants to direct it. He shakes my hand and leaves, but not before mentioning that he also loved my review of Body Heat. I didn't review Body Heat. I realize he thinks I'm Michael Ventura.

I decide to kill Michael Ventura. I look up his name in the city directory but they don't list people named after counties. I go to a store. I buy a gun. I blow out the brains of the guy who sells me the gun. Serves him right.

The police arrest me and I go to the pen where I'm buggered and beaten. I escape in a rubber raft. I'm swept out to sea in a storm. I pass out.

I awaken on the shore of a tropical island. Something bites my leg. It's a toy poodle. Here come hundreds of them. They all get sucked under the sand by some hideous hidden beast. I'd better get out of here.

A string ladder drops from the sky. I climb aboard and get quickly carried aloft. I look up. A helicopter full of soldiers and machine guns. I look down. We're strafing Polynesian huts full of hula girls and tourists. I've got to find out who's in charge here. I climb the ladder. Darth Vader leans out and cuts off my hand. I plummet towards the ground.

I discover I can fly. I go to New York. I meet a girl. I fall in love. We have a deformed baby that looks like a turkey torso with eyes. After six months of trying to raise it as my own, I throw it in the oven one night. My wife tries to kill me. I chase her down the hallway. I throw her out a window. No one notices.

I walk to the bookshelf and remove Franny and Zooey. I take it with me to a special benefit concert for dead rock stars. In memory of Jim Morrison, they change the name of Fire Island to Light My Fire Island. There's a riot as the Who forget the words to "Moon Over Miami"; 27 teenagers are trampled to death.

I steal one of the bodies, dress it in my mother's clothes, prop it up at my dining room table, and force feed it chicken soup till it comes back to life. It can only speak in old Jackie Mason routines. It goes to the Improv and gets discovered by a TV exec who gives it its own show. I'm the only one who knows that the star of a major sitcom is actually a dead teenage girl. I try to blackmail the network. They laugh at me. They tell me they've been using nothing but dead teenage girls for years.

I decide that if they can get away with anything, so can I. I walk down the street strangling people. They arrest me. A judge sentences me to produce a TV special about how bad it is to strangle people. I go back to Hollywood and stab a few backs. No one notices.

I put on a mask so no one knows it's me. I kill baby-sitters. I've killed Jamie Lee Curtis 37 times but she keeps coming back for more. Once, I took off all her clothes, hung her from the ceiling, and attacked her with a blowtorch. I recorded her screams for later. I've stabbed her in the shoulder in the shower and in the trachea in a train. I save the blood and roll around in it.

I build giant monuments to my most grisly actions. I starve babies. Pluck them from the womb and scatter them about the room. No wire hangers, ever!

I leave a bowl of apples full of razor blades by my front door for trick or treaters. I put on a new mask and drive around suburbia with a chainsaw. I cautiously follow a group of children dressed as characters from Broadway musicals. I throw one into the bushes and try to rape her with the Uncola when the hills come alive with the sound of an earthquake. Los Angeles falls apart. Mulholland and Fountain now intersect. Everyone thinks it's my fault, not San Andreas. A crowd of tourists beats me to death. No one notices.

A runaway truck full of plate glass strikes a fire hydrant. One sheet flies off the back and becomes a stained glass window as it slices through my neck. A famous French chef picks up my head and takes it to Wolfgang Puck who cracks it open and serves it to Shelly Winters with a melon scoop.

I wake with a scream and find watermelon pits all over the bed. A beautiful nurse enters the room and tries to feed me hospital food, but I have a strange desire for kibble. She tells me I've been unconscious for months recovering from a poodle bite. I look out the window and notice the full moon. Little pink ribbons suddenly appear in my hair. With a horrible, bone-rattling crunch, my face transforms itself into a snout. I turn into a giant toy poodle. I terrorize the town. The National Guard arrives but they can't fire their weapons on me because I'm so darn cute.

I duck down a dark street and up a deserted alley. I join a gang of other poodles. We attack winos. I awaken naked in a zoo. My boss finds out and fires me but I don't care because I know what I am. I am the longest goddam tracking shot in the history of cinema.

I'm staring into the house through the living room window waiting for your parents to leave you alone. I enter through the back door, grab a knife from the kitchen, and follow you upstairs. I put on another mask. I stab you repeatedly till the walls are a Jackson Pollack of your blood. I walk outside still carrying the knife. I hear sirens. I scream.

I wake up and look around. I'm relieved to find that I'm still sitting in a theater watching the movie. Everyone around me is screaming too, so no one notices mine. I look back at the screen. I'm standing on someone's front lawn and laughing hysterically. I stare down at my hand. There's still fresh blood dripping from the knife in it.

What a funny movie. Soon they'll cut to another shot and everyone will get to see what the killer looks like. I'd really like to know. This Point of View shit is driving me crazy. Why is the director lingering so long on this dopey shot of me standing here looking at this knife in my hand? I hear police sirens. Good, maybe they can sort this out. There they are now.

Hey, guys, over here. What are you doing? This is just a movie, isn't it? I was just watching. I scream but I don't wake up. Nothing goes away.

No, of course I don't know what the killer looked like. It was all a POV shot. What do you mean I've got to come with you? Don't you understand? I had nothing to do with it. Where are they taking me? Why doesn't the director cut to another shot?

The audience gets up to leave. My seat is vacant. No one notices.

What? You thought I made all this up? In order of appearance:

Posted by michaeldare at 6:42 PM

Give Arizona Back to Mexico

Promote Your Page Too